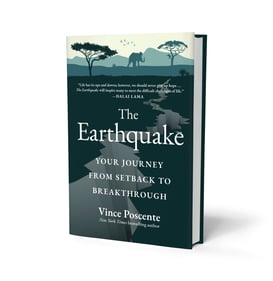 A group of metaphorical creatures presents lessons about perseverance and mental strength in this guide.

In this follow-up to The Ant and the Elephant (2004), Poscente returns to the two animals who are his stand-ins for the conscious (ant) and subconscious (elephant) minds. Adir the Ant and Elgo the Elephant go everywhere together. Adir has learned how to make sure he and Elgo are working toward the same purpose in pursuit of excellence. Their idyllic existence is interrupted by an earthquake that destroys their home—and Adir’s extensive and highly leveraged real estate enterprise—and the two fall into despondency.

After trying to rebuild as all their animal neighbors leave the area, Adir and Elgo eventually set out on a quest for a safe place to serve as a new home. With periodic advice from Brio the Owl, Adir and Elgo set goals for themselves, find a path through unfamiliar territory, and learn new ways to work together. They also face external challenges: Villains Chromia the Wolf and Valafar the Vulture see Adir and Elgo as potential prey. When Adir and Elgo’s conflicts aren’t driving them further from their goals, the predators are.

By implementing Brio’s lessons (“Adir, criticism is like manure. It stinks but helps you grow”), Adir and Elgo are eventually able to triumph. In the introduction, Poscente writes that the book was inspired by his “own personal earthquake,” a confluence of bad financial decisions coupled with the falloff of his public speaking business during the recession of the late 2000s, which forced him to learn the lessons Adir and Elgo discover in the story.

While the talking animal storyline may not appeal to all readers, it follows the successful path of earlier titles like Spencer Johnson’s Who Moved My Cheese? (1998) and Holden Rothgeber and John Kotter’s Our Iceberg Is Melting (2006) and does so equally well. Each chapter ends with a restatement of the pithy lessons taught by the tale, presented as an entry in Adir’s collection of notes to himself. The volume’s insights will be familiar to pop-psychology veterans, but the format is a smooth and persuasive way of concisely presenting them to new audiences.